The 2016 CBR500R model has transcended into 2017 Honda CBR500R with the more aggressive look, better handling and an overall refinement. Fascinating street bike fanatics since 2013, the Honda’s CBR500R has re-energized the middleweight class by bringing forth a sporting energy. This model does not miss out racing spirit as passionate young riders have used it in European Junior Cup race series. 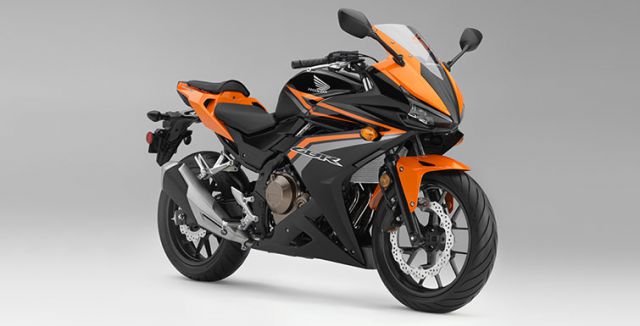 Muffler redesign is probably the biggest change in 2017 CBR500R as it incorporates a new exterior for improving mass centralization and exhaust note. One new addition is the front brake lever which can be adjusted manually.
Both headlights and taillights feature refinements which add a sportier look. Honda has also worked on the airflow management which ensures better handling and creates an increased rider comfort.

The refined looks of this 2017 Honda CBR500R is a part of Honda’s new approach to a unique and hard-edged look. This design approach includes the sharply angled fairings which create a perfect design flow with the upswept tail unit. The fairing cowls feature ducting which improves on aerodynamics to maintain a proper air flow to the air box.

This 2017 Honda CBR500R takes on a classic construction as it is built of a diamond-shaped steel tube main frame and its diameter measures at 35 mm. This endoskeleton houses the engine with four mounts which are designed for reducing vibration. The setup of brakes in this model goes as 240 mm single-caliper wave disc in the rear and 320 mm twin-piston caliper single wave disc in the front. The Honda has used new 12-spoke aluminum cast wheels on both sides (front & rear). These new wheels are lightweight and add great styling.

This street bike uses a 471cc liquid cooled engine which has a parallel twin layout for offering a flexible output and great balance of overall size. This mill is also similar to Honda’s 4 cylinder RR engines as its countershaft, main shaft and crankshaft have a triangular proportion.

The Honda has even borrowed much of the engine’s internal structure from CBR1000RR and CBR600RR. The crankshaft pins are phased at 180˚ as the bore and stroke are set at 67mm × 66.8 mm. Also to note, a couple-balancer is placed behind the cylinders for maintaining the center of gravity.

The 2017 Honda CBR500R comes with a starting price of $6,599 which includes a destination charge of $320. Buyers get a 1-year factory warranty with this model, and KTM RC390 is probably its biggest competition.